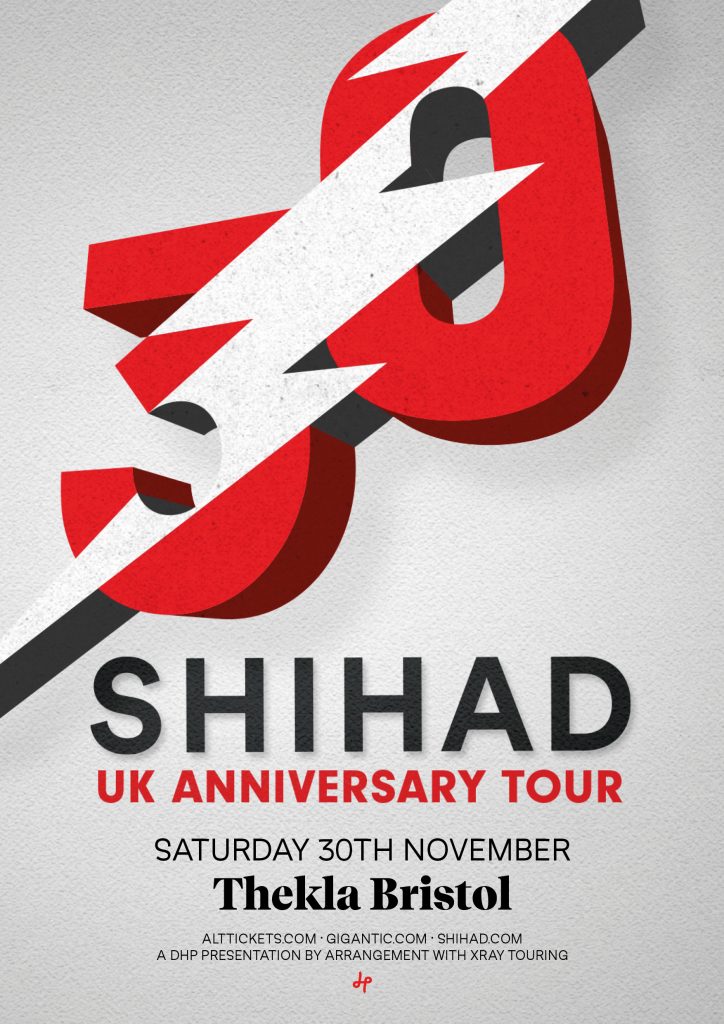 It’s a cold one tonight here in Bristol as we head over to one of the UK’s most iconic and unique venues. Thekla is a ship permanently moored in Bristol’s harbour. It holds up to 400 people and was built way back in 1958. Tonight is going to be special.

The tiny room is beginning to fill with mainly expat Kiwi’s and Aussies plus one very enthusiastic Shihad fan from Bath. The atmosphere is subdued but expectant and there is no support act for tonight’s gig so people are chatting while Tom and Phil mingle and help out on the merch stand.

The fact that Shihad have added dates in tiny venues like this around the UK when they could have just played it safe with one gig in London is testament to the drive that has seen them remain a driving force in rock music for over 30 years.

That gig in London happened last night at the Shepherds Bush Empire where the band played what Jon described as his “favourite ever Shihad gig”, in front of thousands.

Tonight there are around 100 people.

This is going to be special.

The band enter the tiny stage all smiles and launch straight into Think You’re So Free. The sound is amazing. This is the 30th Anniversary tour and it has the same set format I saw back at The Auckland Town Hall a few months ago. Starting with songs from the latest album FVEY, they work backwards right through to Churn.

Karl is wearing a permanent grin through his impressive beard, while Phil effortlessly blasts out those face melting riffs. Jon is Jon, simply one of the best frontmen in the world warming up the crowd with between song banter while Tom is the powerhouse driving the rhythm that already has people bouncing.

Comfort Me results in the first main singalong of the evening and in a room this small with a crowd this size it’s impressive that their voices can be heard.

After a beautiful version of The Brightest Star there is a big shift in gear as My Mind's Sedate sees the crowd collectively lose its shit. One of the best songs ever written it is a masterclass in what a rock song should be. The whole place is moving, and as always Shihad give everything 100%.

The set is classic Shihad, no frills, no fills; just great rock music with plenty of attitude and fun. Jon even heads up to join a few people in the tiny balcony level looking down on the stage. My grin by now is as big as Karl’s, and every single person is dancing and smiling.

We all know Shihad can rock an arena but seeing them tonight playing the equivalent of a local pub is special. I moved back to the UK 6 weeks ago after living in NZ for 17 years. That move back in 2003 was where I first experienced Shihad and was instantly hooked. Tonight I am homesick, tonight was emotional.

Shihad are special. They have long been New Zealand’s best kept secret, but here in this tiny venue and over the past week they have shown the UK how rock music should be played.

As the encore finishes with the pummelling Cheap As I have goosebumps and not from the icy cold British winter air.

Shihad, you were amazing as always please don’t wait another 10 years to get back over to these shores.